Published by Robert Brown on December 5, 2022

Time for a battery check on the nearest VR headset and controllers–as reported by Bleeding Cool, Mobirate’s Space Shells launches on December 6. Taking place abroad on the starships of a vast interstellar fleet, the rogue-lite VR shooter sends its mercenaries on a rampage against deadly robotic foes on Oculus Rift, Valve Index, HTC Vive, and Windows Mixed Reality.

Space Shells is a rogue-lite sci-fi VR game with stunning graphics where you have to break into spaceships and make clever use of your shells to complete the tasks. Each life is a new character, mission and location of enemies in spaceships, as you are able to choose the difficulty of a mission from trivially to nightmarishly hard. Every mission gets you closer to unlocking new weapons and shells to play. 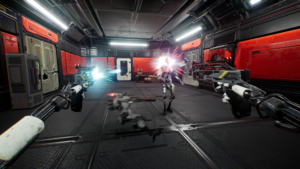 Check out Bleeding Cool’s article here, and learn more about the game on its Steam page. Space Shells hits Oculus Rift, Valve Index, HTC Vive, and Windows Mixed Reality on December 6. Stay up to date with Mobirate via their Twitter, YouTube, and website.