VA-11 HALL-A Creators Talk Sex, Cocktails, and the Cyberpunk Aesthetic with The Escapist

The Escapist’s Anthony John Agnello grabbed a seat at the bar to talk about VA-11 HALL-A, the booze em’up about waifus, technology, and post-dystopia life which has sold more than 300,000 copies on Steam from Ysbryd Games and developer Sukeban Games, with artist/designer Christopher Ortiz and writer/programmer Fernando Damas. In the interview, the creators discussed many things, including the challenges of storytelling in a narrow setting and how the topic of sex should be handled in video games:

What’s magical about a bar? I can only think of a handful of memorable bars in gaming history . . .

Chris Ortiz: It’s where you get to be sincere. Not that we are not honest in our day to day, but a lot of the time we are always trying to save face for a myriad of reasons, and I think we really let our guard down when we are at a bar, be it with friends or pestering the bartender. In the games you mention, that’s pretty much how it always works: characters being themselves after [dealing with] the hardships of everyday life.

How do you make sure that sex feels human and meaningful rather than merely titillating?

Fernando Damas: Media always treats sex like a completely separate entity from the regular human experience instead of part of said experience. A big part of that titillating or gratuitous factor seems to stem from inhabiting a mindset where sex either doesn’t exist or only exists on its more explicit and raunchy form. You’re either creating a world where sex is non-existent or one where sex is the only thing the characters think or talk about. And when you try reach a middle ground using only other media as reference it can be very difficult.

It all comes down to internalizing the fact that sex is something inherent in the human experience instead of something only reserved for specific age-gated content, and that it’s just one of many things you can use in your story. In this mindset a talk between two characters about kinks might just be a sign of the trust they have for each other instead of being one explicitly making a move on the other. You can have characters that are comfortable with the topic, those that aren’t, those that are but aren’t as open about it. It gives you yet another tool you can use to further understand who the character is beyond what the plot requires.

VA-11 HALL-A is available now on Nintendo Switch, PlayStation 4, and Steam for $14.99 and supports English and Japanese languages. For more on cyberpunk bartending and Sukeban Games’ next title, N1RV ANN-A, check out the studio’s official website, Twitter, and Facebook. 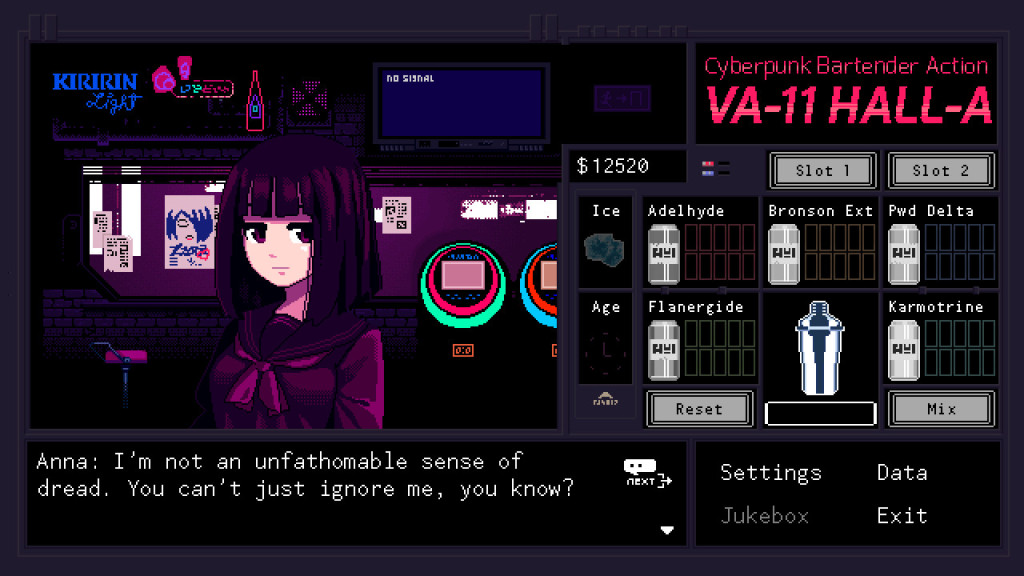