GamesIndustry.biz’s Rebekah Valentine took a look at the International Game Developer Association’s (IGDA) 2019 Developer Satisfaction Survey (DSS) results and broke down the comparisons between 2019 and 2017 respectively.

1116 people were surveyed, most of whom were primarily game developers, though others were included who make games as a small portion of their work or who work in roles supportive of game creation.

Of those surveyed, the demographic breakdown showed a majority of North American participants (60%) alongside smaller groups of respondents in Europe (20%), Australia and Oceania (8%), Asia (8%), South and Central America and the Caribbean (4%) and Africa (1%). Respondents were mostly male (71%) and white (81%), and 79% identified as heterosexual. 28% reported having a disability, with the most common specified being a mental illness; the next most common was visual impairment.

IGDA asked developers about various workplace policies toward increasing diversity and equality, and 8% of respondents said their studio had none of the policies listed (down from 14% in 2017). Policies included a “general non-discrimination policy” (which 71% said their studio had), an “equal-opportunity hiring policy” (61%), and a policy prohibiting sexual harassment (64%). Additionally, 21% said their workplace had a safe space policy, and 16% said they had a retention measurement process.

However, only 59% of respondents said they felt the policies in place were adequately enforced. In fact, 49% said they had experienced some kind of workplace inequity directed at themselves, while 64% said they had perceived inequity toward others.

Other changes from past years surrounded concerns about outside perspectives, with 38% feeling that society had a negative few of the games industry. When asked why they felt this way, the response “perceived link to obesity” received less support this year, but all other factors were selected with a higher frequency. This includes the most popular response, “working conditions” (73%), sexism among gamers (72%), sexism in games (57%), and other issues surrounding racism, sexism, perceived links to violence, and lack of diversity.

That said, crunch rates appear to have decreased, per the IGDA. Looking at regular work schedules, 54% said they worked between 40 and 44 hours per week on a regular schedule, while 14% said between 45 and 49 hours was normal, and 5% saying between 50 and 59 hours was an average week. 41% said their jobs involved crunch time, which is down from 51% who said the same in 2017. There was also a decrease in those reporting working longer or extended hours who didn’t refer to it as crunch — down to 35% from 44% in 2017.

For the full results of the 2019 DSS, please visit the IGDA DSS results website page. For more information about the IGDA, check out their official website. 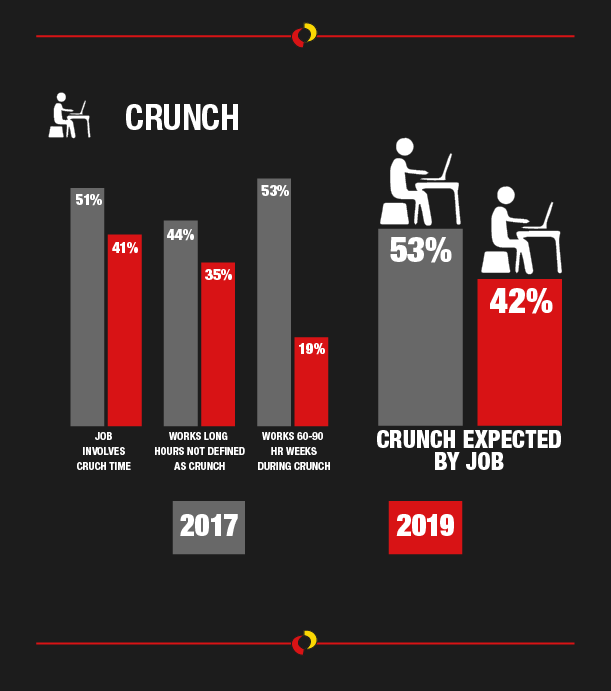